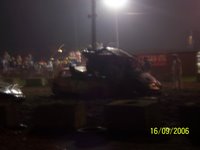 When I was in High School, you know - "back in the day" - the 3rd weekend of every September was reserved for the Binbrook Fair and the Demolition Derby on both Friday and Saturday nights. Friends of mine have run in the Demo Derby for years, they now own their own auto restoration and custom car shop called Muscle Cars Plus and I usually have helped them in the pit area, until recently - having a new baby put a dent in my personal time, not that I'm complaining. I even entered a car one year and ran fairly well, although I'm no Mario Andretti of the Demolition Derby Circuit let me tell you. Man was I sore the next day!

My son has never seen a Demolition Derby, so on Saturday night I took him and my nephew to the Fair to watch the derby. We even went into the pit area and I showed them some of the cars up close and they talked with some of the drivers, they had a blast - my son especially. Since then my son has taken more of an interest in racing. He pulled out 2 of his NASCAR story books the other night and asked me if I could read them to him, he has never asked me to read a NASCAR book - if it ain't Scooby Doo it ain't worth reading. And was I shocked when he said that Dale Earnhardt Jr was cool - I didn't even know he knew who Dale Jr was, I don't have one piece of his merchandise in the house, but he did, and he even knew who Dale's Dad was (but that was a little easier, sicne I still have some of his stuff around the house). He even asked me who won the race on Sunday. Whoa!

You should have seen his face yesterday when I told him that I drove in the derby one year, and then when I told him that I had a video tape somewhere of it he wanted to see it right away. I found it and we watched it together tonight. It was nice sharing that bit of my past with him, he was full of questions and with each answer another question was generated.

Who ever knew that a Demolition Derby would be a chance to have some good bonding time with my son, even days later?

The picture was taken by yours truly on Saturday Night. This is the action in the Mid-Size Class, man those guys hit harder than the V8's. Anyway, they stopped the race when this happened to get the drivers out, if you look close you can see the driver of the bottom car coming out the passenger side window. BTW, the Girls Class was a hard hitting affair as well.

Back to the NASCAR stuff tomorrow. I also have something important to tell you within the next few days - it involves prizes! Stay tuned!