Arian Foster Requests This Press Conference Only Be Conducted in Pterodactyl, Please

Share All sharing options for: Arian Foster Requests This Press Conference Only Be Conducted in Pterodactyl, Please 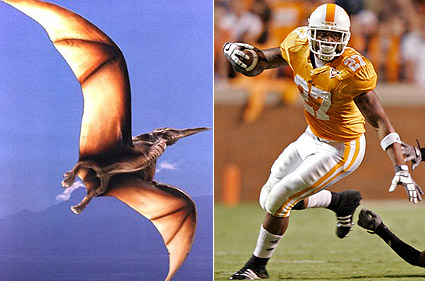 Arian Foster is talented. Not only is a star at the University of Tennessee and a former high school standout in track and field, but he also speaks Pterodactyl.

The Tennessee starting tailback, a senior on the verge of becoming UT's all-time leading rusher, was requested for media interviews. He had a demand: whoever interviewed him had to speak Pterodactyl, some made-up dinosaur language.

No interview was conducted.

It was kind of funny and it fit Foster's quirky personality. But considering the environment and Foster's recent demeanor, it quickly became sad.

Arian Foster, the Cincinnati Bengals just moved you up three rounds on their draft board, since Kenny Irons just isn't cutting it in the strange quotient like he used to, and because they see an opportunity to reach out to the important football-loving Pterodactyl demographic in the Ohio area. In case you're wondering what "Veeeeeek!" means in Pterodactyl, well, I don't know either, but based on Foster's most prominent on-field accomplishments, I'd guess it means "game-ending fumble."