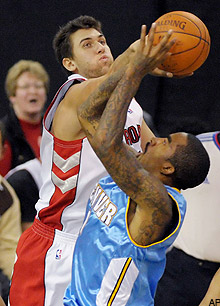 Go ahead and toss the Raptors into the Gerald Wallace/Al Harrington/Knicks rumor grinder. According to the â†µGlobe and Mail, Toronto's front office has been talking to the Bobcats and Warriors. But all parties are interested in a certain Italian No. 1 overall selection who isn't necessarily carrying his weight yet: â†µ

â†µâ‡¥Bargnani, whom Colangelo remains bullish on and who is showing signs of putting last season's sophomore pratfall behind him. But one might guess that Colangelo's belief in the former No. 1 draft pick's long-term potential doesn't match Mitchell's win-now urgency. â†µ

â†µIt's funny, if perfectly understandable, that even an accomplished GM like Colangelo feels a special bond with a No. 1 overall pick like Bargnani. Even when dude came from an absolutely terrible draft, making him more like any other year's No. 7 overall. It's like the way the first-born always receives preferential treatment from Dad, even as he runs through the trust fund and refuses to get a real job. But it's good to see that Colangelo, one of the best in the business, is capable of seeing past this sentimental attachment. Or is he? â†µ

â†µâ‡¥Considering that Colangelo is on record saying that this is the best team the Raptors have had on paper, it could make for some tense conversations when it comes around to trying to figure out whether it's the captain or the ship that's going off course. â†µ

â†µIt's pretty clear that, as Mitchell's been preaching since the beginning of the season, this team needs more athleticism. In Bosh, they've got a real stud, and a chance to ride him to excellence. Thus, this isn't about the kind of team Colangelo would want, it's about Bosh in hand, with the option to split next summer, and being this close to making that, ahem, leap. With the Jermaine O'Neal trade, they've already started down the "win now" path; this is no longer an exercise in building the ideal team, it's about a smart GM now showing he can invest in something other than idealism. â†µ
â†µ
â†µWe all expected Colangelo and Mitchell to mix like oil and water. Here, you're seeing that contract in action. But that it's about a real issue on the team, and after its had some measure of success, makes you think that contrast might be deliberate. And, if I'm not making all that up, more proof that Colangelo is a genius, even when it happens at his own expense.â†µ