Washington Huskies: The Worst of the Worstest

Share All sharing options for: Washington Huskies: The Worst of the Worstest 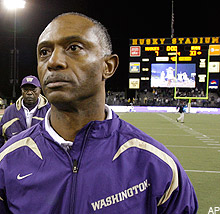 North Texas remains a terrible football team, a haphazardly assembled collection of football players no doubt trying very hard to play the game of college football in an organized, non-embarrassing fashion. They have the worst defense out of 119 teams in the Football Bowl Subdivision. They are not, by any stretch of the word, good, and surrendered 77 points in a single game to Rice this season. â†µ

â†µSan Diego State is a terrible, terrible football team (1-9). So is SMU (1-9), or even Syracuse (2-8), probably the most high-profile college football program currently undergoing a four-month long public humiliation this season. All of these programs can claim one precious commodity, though. Each has at least one victory, or in Syracuse's case, two victories, presumably because they were having some kind of 2-for-1 sale at Costco on victories, and Greg Robinson happened to have the company card. (Or because he continued his mysterious spell over Steve Kragthorpe. Either way it works.) â†µ

â†µThere remains one sad, miserable wretch of a team sitting weeping on the ash-heap of their season without even a win over a Division-1AA opponent. The Washington Huskies sit at 0-9 on the year, the last winless team in major college football. Three games remain on their schedule, and two are potentially winnable: UCLA and Washington State. (They are not beating Cal, because Cal is good, and Washington is the opposite thereof.) â†µ

â†µIf the Huskies lose to UCLA and get to the Apple Cup rivalry game against Washington State (1-9) still looking for their first win, it may be essential viewing of the most desperate sort, like watching two homeless men fight over the last can of Sterno in an alley. You'll hate yourself for watching it, you really will ... but you won't be able to look away, either. â†µ