Obama Admits to Anti-Americanism: He Not Only Doesn't Hate Soccer, He Actually Likes it

Share All sharing options for: Obama Admits to Anti-Americanism: He Not Only Doesn't Hate Soccer, He Actually Likes it 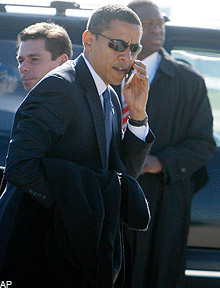 Now that he has been elected president of the United States, Barack Obama can come right out and admit that not only does he watch Premier League soccer, but he has a favorite team. â†µ

â†µâ‡¥The key question hanging over Barack Obama's White House credentials has been answered - the Democrat has been revealed to be a West Ham United fan ... According to reports, the US senator has been a fan of the Hammers ever since a trip to England five years ago and watches Premier League games whenever his busy schedule allows. â†µ

â†µThis means Obama is technically a fan of a club that calls itself "the Hammers," which is pretty butch in itself, and that unlike Hilary Clinton he is not a supporter of Manchester United, the New York Yankees of international soccer. (He gets points for that alone, since Manchester United is the only soccer team most Americans can name off the top of their head.) Sadly, West Ham is badly in need of change, and could use some of Obama's campaign mojo: the team is lingering in 14th place in League standings out of 20 teams. â†µ

â†µFor the record, we would like to state that The Sporting Blog's favorite team ever was Allied '44. Any team with Sylvester Stallone in goal simply can't be stopped. â†µ