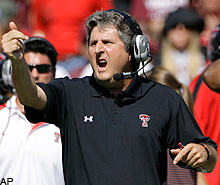 Tennessee fans want Texas Tech coach Mike Leach, a sudden turn of events not unlike finding out your grandmother is listening to a ultra-hip indie band it took you weeks to find. â†µ

â†µThe target for the administration is Butch Davis, the current North Carolina coach who has now rebuilt both the Tar Heel and Miami programs. Davis is a fine pick, albeit one who is currently employed by another Division 1 school. (Pshaw. Details, details.) Davis denies this in textbook fashion, but Tennessee's budget would allow them to dislodge all but the most stubbornly loyal of coaches from their current job. They could force UNC's hand in a manner UNC could not answer, and Davis ends up at Tennessee. â†µ

â†µDon't tell that to the Tennessee bloggerati, however, who clamors for the pirate ways and explosive offenses of Leach. Coming from the pound-pound-pass-punt tradition at Tennessee this seems at the very least odd, but something about the pirate king has them smitten. What, you ask? A rare commodity at Tennessee these days: offensive innovation.   â†µ

â†µâ‡¥Will Tennessee and its fan base accept such an affront to its tradition? All of those notions are anathema to Tennessee’s tradition, which has been to pound the rock for three yards and a cloud of dust, to play a conservative field-position game and to chew up the clock. Would the Tennessee establishment embrace any of Leach’s offensive nonsense? â†µâ‡¥

â†µâ‡¥If only they give it a chance, they will. Texas Tech was apparently a run-first, time of possession type team prior to Leach’s arrival. After the initial shock, they warmed up to the innovation because it worked. â†µâ‡¥

â†µClay Travis, who's writing a book about the 2008 season and who has had full access for the end of the Fulmer era, endorses Leach as well. Leach makes at least as much sense as Davis on paper, and has another crucial advantage in his relative youth. Davis is 56, and has already survived one bout with cancer. Leach is 47, and unlike Davis has never displayed any aspirations toward a career in the pros. â†µ

â†µBoth make far more sense than option three for the Vols, Tampa Bay Buccaneers coach Jon Gruden. Gruden coached at Tennessee as a grad assistant under Johnny Majors in 1986, and has labored in the pros for the better part of his career. He's young, probably already dangerously close to burnout, and could jump back to the pros at the drop of a hat. Oh, and he runs the same complex West Coast offense Tennessee players failed to pick up under offensive coordinator Dave Clawson this season. Other than all of the things I just mentioned and his gargantuan price tag, he's perfect. â†µ