Battier Hits Us With Perspective, Likeability

Share All sharing options for: Battier Hits Us With Perspective, Likeability 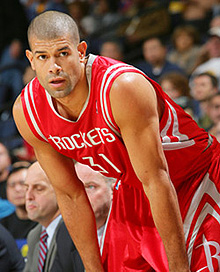 Lots of people dislike Shane Battier. He's a Dookie. He's the kind of player coaches love, and love to remind fans about just to remind them who really knows what's up. He also will likely be on the fantasy team of the guy who wins your league, engulfed all the while by self-loathing. And it's only natural that he's part of an NBA franchise to make advanced stats geekery a key part of their front office philosophy. â†µ
â†µ
â†µAll that said, and as sick as you probably are of athletes proclaim their Obama fever, this Houston Chronicle piece on what this means for Battier is eye-opening. Especially if you can't stand the guy, and think of him as one step away from Doug Christie: â†µ

â†µIt gives you a fresh perspective not only on this election, but also on where Battier stands in the league. One more quote, which I think reads both ways: â†µ

â†µâ‡¥"I remember in elementary school, Penbrook Elementary School on picture day, I was the only minority in the entire school, probably 400 kids. Everyone got combs on picture day. I was the only one who got a pick. On Martin Luther King Day, my classmates would look at me. I was in first grade and I was supposed to be the expert on Martin Luther King because I was different. I would go to the inner city to play basketball. People would look at me like, 'Oh, he's the white kid from the suburbs.'" â†µ

â†µSee, if only there were more sports journalism like this, it would be much more difficult to develop a strong and baseless aversion to certain players. Well done, Jonathan Feigen.â†µ