Interpreting Marinelli's Parable of the Tunnel

Share All sharing options for: Interpreting Marinelli's Parable of the Tunnel 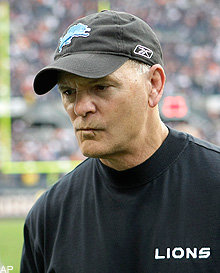 Rod Marinelli is the coach of an 0-9 football team. This alone is likely to cause some hallucinations, but even such intense pressure doesn't fully explain the parable of the tunnel Marinelli trotted out in yesterday's press conference in Detroit. â†µ

â†µâ‡¥“You’re in this dark tunnel and you’ve got no way out,” he said. “You’re waiting for light, and you see that light, what do you do? What do you do? You start digging and getting out. ... I’ve always believed you stay in the tunnel and you keep digging when you expect no light. â†µâ‡¥

â†µI have a degree in English, so we're right in my wheelhouse here when it comes to literary interpretation. The possible meanings behind Marinelli's speech are endless, but the leading suspects are: â†µ

â†µ1. Marinelli's been reading Plato. Clearly, this is an an allusion to the Allegory of the Cave, Socrates' famous metaphor for human existence. Except that instead of being chained to the wall in dim light, the roof has caved in, there's no hope, and you have a pickaxe. Clear enough, and testament to his fine California Lutheran Education that he can just drop classical philosophy with such ease. â†µ

â†µ2. He's been watching Kill Bill. Marinelli sees himself as being prematurely buried, and is fighting out from under six feet of dirt and the weight of a coffin lid to reach the sun. Another fascinating metaphor, and according to Mythbusters, a sad one for Marinelli: contrary to both Kill Bill and the USA Movie Night classic Buried Alive, it's not possible to dig yourself out of your own grave. â†µ

â†µ3. He's really carrying a pickaxe around the Lions' facility. It's sharp, he's under pressure and hallucinating, and you might just want to avoid him altogether for the rest of 2008, Lions employees, lest he mistake you for a wall of dirt preventing him from seeing the sun. â†µ