Overrated Chris Kaman May Soon Be Out of L.A.

Share All sharing options for: Overrated Chris Kaman May Soon Be Out of L.A. 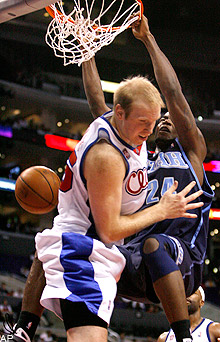 I'm thinking I wasn't the only person rubbed the wrong way by this Chris Kaman quote, from yesterday's Los Angeles Times: â†µ

â†µâ‡¥"I don't want to take anything away from Dallas, but I don't think they're on the same level as the Lakers or the Jazz. Right now, they have the potential, but they're just not there yet. I talked to Dirk yesterday and he was saying they're not playing together. They're not playing the right way. And we've had the same problem." â†µ

â†µBlah blah blah, I'm a virtual German, the right way must rule, my whole team is coming up short, me and Dirk sit around and shake our heads at our respective NBA teams. I know Kaman had a solid 2007-08, but I had him pegged as someone whose stock would slip this season. Anyone expecting the guy to be an All-Star center on a playoff team is fooling himself. That's why the aforementioned quote bothered me so much. And why, even though it's written by Peter Vecsey, this bit in the Post made my morning:
â†µ
â†µ â†µ

â†µâ‡¥The centerpiece [of the latest trade rumor] does involve, I'm informed, is Chris Kaman. Now that Marcus Camby (double-figure rebounding last two games) is nearing full strength, the 1-6 Clippers are open to a rational market trade for the big guy who has battened down their middle for five seasons and is owed $43 million over four seasons. â†µ

â†µThat's right, the Clippers might rather have Camby, whose numbers belie his limitations, than the hard-driving, fire-breathing, right-way-toutin' Chris Kaman. Admittedly, Kaman's contract is big and lasts a while, as opposed to Camby's, which is a relative bargain and won't be on the books much longer. So such a move wouldn't be entirely about what each man is worth on the court. Regardless, the possibility makes me oddly happy. I think there's a German word for it. Maybe I should ask Kaman, so he can ask Dirk.â†µ