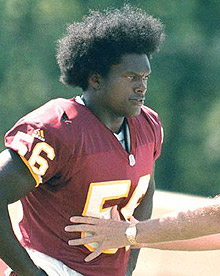 LaVar Arrington had a nice little career with the Redskins. And by “nice,” I mean he made three Pro Bowls (although his selection to two of them is questionable), and by “little,” I mean he only played six seasons with the team, three of them for a full 16 games. All-in-all, Arrington was a bust considering he was drafted No. 2 overall in 2000. â†µ

â†µDespite that, most Skins fans -- myself included -- have a special spot in their hearts still for LaVar. He was an absolute physical freak who played all-out, every down. He was able to make plays that other linebackers, or human beings in general, couldn’t dream of doing. Plus, LaVar ended Troy Aikman's career. For that, we're forever grateful. In the end though, an injured knee and fractured relationship with the organization did him in. We always took his side though. Partially because we loved him for the reasons explained, and mostly because we’d never take Dan Snyder’s side. On anything. â†µ

â†µHowever, I have to imagine it’s going to be difficult for some fans to look past this comment he made to The Washington Times recently: â†µ

â†µâ‡¥"I called Joe Gibbs a coward for leaving," Arrington said. "You came in, you made some money for your NASCAR team. No one else is going to say that. I'm sure more people thought I was a [jerk] for saying that. Joe wouldn't call me because he knows. There are a lot of people who know the truth about what went down with me and the Redskins." â†µ

â†µI don’t know the finances of Joe Gibbs Racing, but I believe Gibbs returned to the Skins because he loves the team, football, coaching and wanted to return Washington to the glory he once knew. He gave it all he had for four years, and then knew it was time to walk away after last season. It was an admirable, two-playoff-berth effort that brought the team back to some level of respectability. â†µ

â†µAside from that, we’re talking about Joe Gibbs, Hall of Famer, Super Bowl champion thrice over and the next in line to Jesus himself. You do not say such things about that man while in the D.C. area. Especially when you own a new sports bar in said area, which Arrington does in nearby Largo, Md. It’s not good for business. â†µ