Share All sharing options for: In Defense of Mike Singletary and the 49ers Last Second Play Call on Monday Night 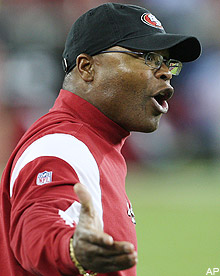 If you’d like to hop aboard the Mike Singletary Is an Idiot Gravy Train, it’s making another stop in your neck of the woods this morning following Monday night’s last second debacle. Sporting News’ own Mike Florio and Dan Shanoff are all aboard, so quick, jump on before it fills up. â†µ

â†µUnless you’re like me, and you agree with what Singletary said about the officiating last night: â†µ

â†µâ‡¥"No one came to our sideline to say the ball was going to be moved," Singletary said. "Someone should do that. There should be some people -- we shouldn't have to stand over there and see the ball is being moved while everything is going on, because we're trying to make the correct (play) call." â†µ

â†µTo clarify, the complaint is that after reviewing Frank Gore’s second down run, the officials determined the runner to be down at the 2 1/2 yardline. Yet no one told the 49ers’ sideline where it was marked -- according to offensive coordinator Mike Martz, they believed the ball was spotted at the one. Hence, he called a fullback dive play, designed to gain one yard, not two-plus. In fact, Martz admitted that he didn’t know the play was run from the 2 1/2 until after the game when former coach Mike Nolan told him. â†µ

â†µNow, this might sound like sour grapes, or what have you, and hindsight is a crystal clear 20/20, but if you watched that game live, then you know there was mass confusion after the replay review. The officials marked the ball, and the clock immediately started, instead of once the ref blew the whistle. So, with four seconds left and time ticking, S.F. called a play from what they thought was the one yardline, and it failed. It is fair to say they should’ve spiked the ball, regrouped, and called a fourth down play, but you can totally understand Singletary and Martz’s complaints. There was a breakdown in communication and the officials never told the coaches the exact situation. From the one, calling that dive play and catching the defense on its heels, instead of spiking it and allowing Arizona to regroup as well is great call. From the 2 1/2, well, we saw what happened. â†µ

â†µFurthermore, Singletary is sending the right message by claiming that he won’t send a formal complaint to the league. Florio mocked Singletary for this, but what’s done is done; the league isn’t going to let them replay those last four seconds. It sends a message to his team that they aren’t going to make excuses. A team, I might add, that -- to borrow a term from Joe Gibbs -- fought its guts out on Monday night. It seems to me that Singletary might actually be the solution in San Francisco. At the very least, he deserves a full season at the helm. â†µ