Share All sharing options for: AI Ain't Breaking Down; Stop Asking and Enjoy 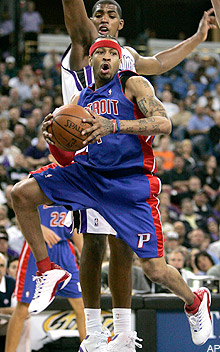 No matter how you feel about Allen Iverson's style of play, you can't knock his realness. That's "candidness," for the older folks out there. Check out this answer to the proverbial "how much longer do you have" question, posed by Detroit News: â†µ

â†µIn other words, check back with me when I'm breaking down. Or when I tell you I am. It's clear Iverson has lost a step, but he's still a force to be reckoned with. And no one's disagreeing with that. So they go to the source, expecting him to say "no, on the inside, I'm barely alive"? Just accept that dude is, against all odds, still going strong, still throwing himself into the game like he just hit the league. Marvel at that, don't question it. â†µ
â†µ
â†µOh, and for the record, Rip Hamilton with some similar consternation: "I mean, he's just as fast as me. So when I am running up the court I can see right on the side of me. That's a little shocking. I ain't used to people running with me like that." â†µ
â†µ
â†µAllen Iverson is a freak of nature and a national treasure. Say what you will about his game, or its effectiveness, but he's unlike any athlete before or since. You should enjoy him while he's here, instead of waiting for him to collapse at half-court and end a long national nightmare. Because once he's gone, the game just isn't going to be the same -- even for those of us who take him for granted or find him occasionally maddening.â†µ