Share All sharing options for: Gallinari's Injury Will Mark Downfall of D'Antoni 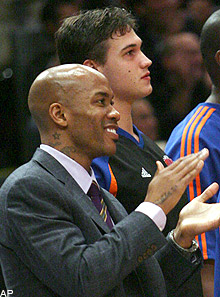 I wanted to believe that Mike D'Antoni would enjoy a grace period with the Knicks. And with the team at 4-3, having shown flashes of up-tempo brilliance and brio, he deserves one. But since New York makes no sense, the Knicks make no sense, the media there makes no sense, and the combination of all three does nothing but bring evil until the world, I'm afraid the skies may darken soon. According to The New York Post, Danilo Gallinari's rookie year could already be over: â†µ

â†µSo what if Gallinari hasn't been central to the Knicks thus far. He's new blood, a player who positively screams D'Antoni-ball, came up through the European ranks like Coach, and also, has an Italian name. The new status quo is fine, but the future? This puts a major damper on it, or at least the chance it'll rear its head this season. This when the Knicks could've drafted ... I don't know, Darrell Arthur, Joe Alexander, JaVale McGee, D.J. Augustin, or Donte Greene. Any of them might have made this new regime happy, with so thoroughly reeking of D'Antoni. And now, Gallinari will immediately be branded a bust, the system will be a failure, the road ahead will stagnate and blister, and by next year, it's Flip Saunders time!â†µ