Your Useless Cy Young Trivia of the Day

Share All sharing options for: Your Useless Cy Young Trivia of the Day 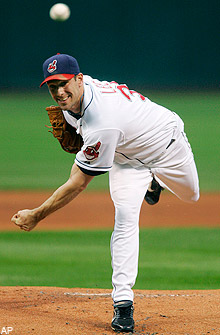 The naming of Cliff Lee as the A.L. Cy Young Award winner today was a foregone conclusion, marking the second straight year that a Cleveland Indian has won the award, after C.C. Sabbathia, currently a Brewer, took home the A.L. Cy last year. â†µ

â†µI’m afraid I’m going to have to go all Jayson Stark here about this and point out the fact that two different pitchers from the same team winning back-to-back Cy Youngs is a relatively rare occurrence, one that hasn’t happened in the American League since the Blue Jays’ Pat Hentgen and Roger Clemens won in 1996 and 1997 respectively. Prior to that, it’s only happened three times in the A.L., and bizarrely all three came during a six-year stretch. The Brewers’ Rollie Fingers and Pete Vukovich won in 1981 and 1982, the Orioles’ Mike Flanagan and Steve Stone won in 1979 and 1980 and the Yankees’ Sparky Lyle and Ron Guidry won in 1977 and 1978. â†µ

â†µIn the National League, this phenomenon has occurred three times, the last being in 1995 and 1996, when the Braves’ Greg Maddux and then John Smoltz won the Cy. Prior to that, it was the Phils’ Steve Carlton and John Denny in 1982 and 1983. After that, we have to go back to the days when there was only one Cy for both leagues, when the Dodgers’ Don Drysdale and Sandy Koufax won the award in 1962 and 1963. â†µ

â†µNow if you’re paying attention, you probably know where I’m going with this, which is to say that, as the eighth duo of the same-team, two-pitchers, back-to-back Cy Young club, Sabbathia and Lee still managed to make minor history today. They are only the second twosome, after Hentgen and Clemens, to win consecutive Cy Youngs for the same team when that team DID NOT make it to the World Series in either of the Cy Young seasons. The Braves, of course, won the Series in ’95 and then lost it to the Yanks in ’96. The Phils lost to the O’s in ’83, the Brewers lost to the Cardinals in ’82, the O’s lost to the Pirates in ’79, the Yanks won it in both ’77 and ’78, and the Dodgers famously swept the Yankees in ’63. â†µ

â†µSo you’re probably saying to yourself: well, the Indians almost made it to the Series last year, they were just one agonizing game away. But hey, Buckner almost fielded that grounder in ’86 and Willie McCovey’s line drive almost cleared Bobby Richardson’s head in ’62. For what it’s worth (precious, precious little, I know) Sabbathia and Lee today joined Hentgen and Clemens in a very exclusive and arcane club of Cy Young trivia. â†µ