Share All sharing options for: Kobe Bryant and His Mutant Brain Powers 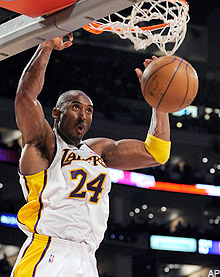 Over the course of his career, Kobe Bryant has been accused of many great and terrible things. He has also been esteemed above all others in the game. But as far as I know, no one's yet suggested that he's got psychic powers or a mutant brain. That is, until now. And lo, it's none other than Derek Fisher, longtime best bud on the team, leveling these eye-opening accusations. Or I don't know, maybe these are the highest form of praise. You decide. â†µ
â†µ
â†µFrom the Los Angeles Times: â†µ

â†µâ‡¥"I'm never surprised to see him do anything," said Fisher, who matched Bryant's 20 points with 20 of his own. "I said several years ago that he's one of those rare guys in the history of the game that I think can actually make the ball go in. When it's a tough shot and three people are on him and he's falling away, mentally he's able to lock in on that rim and get the ball in the basket. I think that's what separates him from some of the best to ever play." â†µ

â†µI get what he's saying, having watched Kobe play a lot. And myself being in awe of Kobe's skills on the court. But -- and I promise this isn't out of context -- what Fisher's saying here is more than a little weird. I'm not saying it isn't true, and certainly he's in a position to know. If that is the case, though, teams had better watch out. It's only a matter of time before he starts blocking shots using his brain waves alone, or causing turnovers with the power of telepathic suggestions. Is that illegal? Does this make Kobe a cheater? We'll have to get back to you on that one, after the paranormal branch of Stern's office has been faxed in triplicate. â†µ
â†µ
â†µSo if the Lakers remain unbeaten, and this meme catches on, expect to hear the enemies of Team Kobe spread it, or some more dastardly version of the theory, like "he sold his soul to Satan" or "his favorite show is Charmed." To which I'd say, chill, like you, dude obviously just read too much X-Men as a kid. Except while you saw it as fantasy, Kobe Bryant took it as one more professional responsibility to one day tend to. Let's see Tim Duncan, he of the metal frame and timeless gears, take on Magneto and win. Of course it'll never happen, but at least Kobe's ready.â†µ