Wow, That Jets-Pats Contest Was Some Game Last Night ... Really Wish I Could've Seen it

Share All sharing options for: Wow, That Jets-Pats Contest Was Some Game Last Night ... Really Wish I Could've Seen it 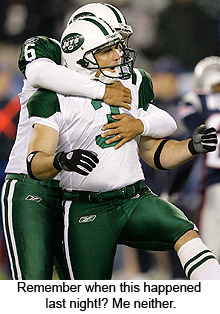 Some game last night, eh? Word is that Brett Favre played well, and that Matt Cassel, boy, he must’ve done something right based on the box score. Yeah, the highlights I watched on NFL.com made it look like an outstanding contest. Unfortunately for me, and many, many others out there, I didn’t see anything beyond the six minute recap because I still don’t get the NFL Network. â†µ

â†µBut guess who gets to watch these Thursday night games in the comfort of his own home: The Commish. Via The Washington Post: â†µ

â†µâ‡¥NFL Commissioner Roger Goodell tells a story about recently switching cable television companies at his home. His new cable provider carries the league-owned NFL Network as part of a basic package, he says. Soon after changing, he answered the phone at his house and found himself talking to a sales representative from his old cable company. â†µâ‡¥

â†µâ‡¥"He said, 'Well, can we ask why you're no longer with us?'" Goodell said during an interview last week, declining to identify the company. "And I said, 'Well, you don't have the NFL Network.' He said: 'No, we're negotiating to get it right now. Do you think we can get you back? We're negotiating, sir, very hard on this.' â†µâ‡¥

â†µYeah, Roger, stick it to the man. That must’ve felt so great. Good for you. You no longer have to inconvenience yourself by chartering a private jet to the stadium to sit in one of those uncomfy luxury suites. Really, congrats. We’re all so happy for you. â†µ

â†µIf you’d allow me, I’d like to tell you a little story: I cannot get the NFL Network, even if I want to. (And trust me, I want to). Unlike you, Mr. Commissioner, my area only has one cable provider. I think this is the case in most regions, actually. So I cannot up and switch to another cable company. Oh, sure, I could get DirecTV, but I also enjoy being able to watch television even on cloudy days. â†µ

â†µNow, I understand that this probably isn’t the NFL’s fault. Fine. Let’s blame the cable providers. Whatever. Really, at this point, it does not matter. The bottom line is that only 42 million households get the Network. The rest of us are left following along on ESPNews, wondering why we continue to put ourselves through this abusive relationship with the National Football League. â†µ

â†µSolution: In the meantime, while the two sides are stuck in their pissing match, the NFL needs to stop pointing fingers and put the games on a Network everyone gets. Like last season, when NBC and CBS were allowed to simulcast the Pats-Giants game. I know, I know, that's crazy talk seeing as it would, temporarily, damage the NFL Network's ratings while at the same time actually doing something to benefit the fans. â†µ