Weis Will Let You Take a Photo With His Ring

Share All sharing options for: Weis Will Let You Take a Photo With His Ring 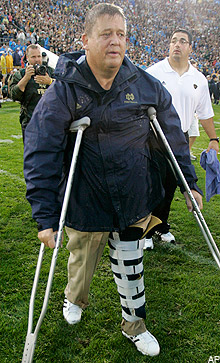 Charlie Weis has a Super Bowl ring. Whoa! He has THREE of them. From the way tales of his recruiting visits go, it astonishes me that he doesn't wear all three of them in one huge hand-size arrangement spelling out "WIN", or perhaps "PIE." â†µ

â†µTeddy Greenstein has a piece this morning in the Chicago Tribune detailing Weis' trip to Jeannette High School in '07 to recruit Terrelle Pryor. While there, Weis made the oh-so-generous offer to Pryor's coach Ray Reitz to be pictured with the Super Bowl ring he wears, an offer Reitz said he took just to be polite after a few moments of awkward silence. He then gave the picture of the ring to a kid, because kids are impressed by things like that, and not adults who are taking part in the serious and hectic business of football recruiting. â†µ

â†µYou'll be shocked to find out that Reitz thought Weis was "arrogant as hell," and says that Weis mentioned putting Ohio State's current starting quarterback at wide receiver. (The italics in this case mean "this concept is stupid as hell.") â†µ

â†µâ‡¥When Weis visited Pryor's school in 2007, Reitz recalled, he said that if Pryor couldn't cut it at quarterback, "we'll use him on the outside." â†µâ‡¥

â†µâ‡¥No other school introduced the idea that Pryor might play receiver. â†µâ‡¥

â†µâ‡¥"Here's the best part," Reitz recalled. "He says to Terrelle: 'Call me tomorrow at 6. I'll be watching where Brady Quinn gets drafted.'" â†µâ‡¥

â†µPryor, being a gifted teenage athletic demigod, is really, really arrogant, as just about anyone would be at that age with those skills and impending NFL wealth waiting in the wings. If Weis was too off-the-charts arrogant for Pryor's taste, then the word may be in need of redefinition. Also, if Reitz is calling Weis "arrogant as hell" in print, Weis may just want to save Notre Dame the expensive jet fuel and lay off recruiting any players out of Jeanette High for a while, since that well is probably good and poisoned now. â†µ

â†µWeis has bigger things to worry about, though, like beating Navy. That's easy though, right? â†µ