Looking Ahead to Odom's Future Outside of L.A.

Share All sharing options for: Looking Ahead to Odom's Future Outside of L.A. 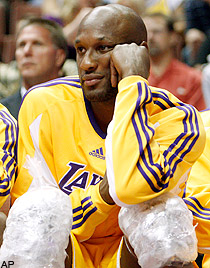 Chad Ford's already starting to circle his army of mechanical vultures and break down the free agent situation for this coming summer. A lot of these have already been done to death: Iverson's on a trial run in Detroit, Artest's on a short leash, if the Heat are rebuilding, Marion's need for a huge deal isn't working with them. But I was really struck by what Ford had to say about Lamar Odom: â†µ

â†µâ‡¥Odom will be one of the most coveted free agents on the open market. Phil Jackson likes him, but with Kobe, Bynum and Pau Gasol on the roster, the Lakers don't need him and might explore trades for him in the coming months. Odom's penchant for disappearing in big moments (see: 2008 NBA Finals) hasn't helped his rep in L.A. But he is a great team guy who can rebound the ball and initiate the offense. And he doesn't need the ball to be effective. If he doesn't stick in L.A., a line of teams will be waiting to snatch him up. â†µ

â†µGranted, the 2008 Finals are still stuck in some people's craw -- often those who had never really watched him up to that point. But Odom's still got that "next Magic, or next Garnett, just waiting to happen" rep to fall back on, as well as that one season he actualized it in Miami. And it almost doesn't matter what happens this season, since there's no guarantee that every player, especially who isn't really suited to being THE MAN, will actually work as the star of the second unit. In short, it's not Odom's fault he's not Manu Ginobili, and his playmaking is wasted on the Lakers' bench mob. He just needs to cooperate, and prove that the bad fit isn't his fault, that in Los Angeles he's basically been a victim of circumstance. â†µ
â†µ
â†µSo while this season, or more likely, the first half of it, will be a blank for Odom, he's also an extremely attractive piece for other teams. Which means, you know, that the Lakers could pull off another blockbuster move, one that fills whatever holes they have rather than compensates for a hurt player (like Gasol did Bynum). I still like to believe that Odom, Gasol and Bynum could make beautiful music together, but that ship has sailed. Next best thing: Odom is shipped off to a solid team in need of a new perspective, and Los Angeles just gets mightier and mightier. Well, maybe the latter isn't such a feel-good story.â†µ