Share All sharing options for: Sucked Into the NFL's Black Hole, Week 11

Everything on this planet is soon going to disappear into a massive black hole. Each Monday, we’ll present those football-related elements that have already been swallowed into the abyss.
â†µ
â†µ 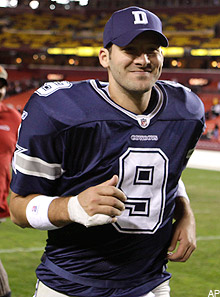 Romo’s Pinky Problems.
â†µA nation waited, anxiously anticipating how Tony Romo’s pinky would fare against the Redskins. The result: Eh. The pervading thought this morning seems to be that Romo saved the Cowboys, and won last night’s game for them. But really, if you watched the game, Romo was very average. Several throws were off target, fluttering like dead ducks, and the first of his two interceptions was just a horrible pass behind T.O. and into the hands of new Redskin DeAngelo Hall, who was beat on the slant. â†µ

â†µSure, Romo played better than Brad Johnson/Brooks Bollinger, but the game was won by Marion Barber and the Dallas defense. Aside from their first drive, the Redskins were unable to sustain any offense whatsoever. You really cannot overstate how huge this win is for the Cowboys, and how deflating it is for the Redskins. Both teams are now stick somewhere in the middle of about 10 teams vying for two Wild Card spots. â†µ

â†µRaiders Coaching Vacancy. Former Giants coach and Ravens coordinator Jim Fassel has reportedly written a letter to Raiders owner Al Davis expressing his desire to be the next head coach in Oakland. And it was hand written. That’s how you know he’s serious. Had it been typed, we’d have simply assumed it was a clever ruse being played on Davis, but now that we know Fassel means business, Al should go ahead and hire him now before Fassel changes his mind. Fassel isn’t necessarily a desirable coach, but he may be the only person in America who is actually willing to lead the Raiders under his own free will. The man must enjoy pain. â†µ

â†µThe Bengals’ Total Ineptitude. Donovan McNabb tried really, really hard, but just couldn’t quite suck enough to hand the Bengals their second win. Cincy did, however, earn a tie out of it and with a Browns loss tonight is just 1.5 games from being out of the AFC North’s cellar. Also, Ziller covered this yesterday, but I just can’t get over it: McNabb didn’t know that there are ties in the NFL. Really? I have no idea how that is possible. â†µ

â†µRod Marinelli’s Sanity. In another odd press conference (last week’s was interesting as well), the Lions coach got into an exchange with the media during which the reporter seemed angry with Marinelli and Marinelli seemed oddly jovial. He said this, followed by a nice big smile: â†µ

â†µâ‡¥"I've got unbelievable encouragement. Why wouldn't I? You're asking me why, because I believe in these guys. â†µâ‡¥

â†µâ‡¥"Have we failed? Yes. Have I failed? Yes. Am I going to give up? No way. Am I discouraged? No way. I'm not. You can ask me that until the cows come home and you're going to get the exact same answer." â†µâ‡¥

â†µMarinelli might be the only man on earth who could be in the midst of failing as epically as he and the Lions are, yet still be totally encouraged by this. For that, we’re requesting a padded room be made available somewhere in the greater Motor City area within the next 24-48 hours. Rod might need somewhere safe to stay for awhile.â†µ