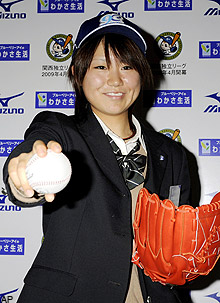 The Japanese and baseball are like this, son, and being the innovative people they are, they have gone a step further than Americans by actually signing a woman to play pro ball. â†µ

â†µEri Yoshida will play for a new independent league starting up this year, and is undoubtedly part of a publicity stunt of sorts, though the 16 year old's knuckleball is no joke once it starts wobbling the right way. She will pitch for the Kobe 9 Cruise team, and at 5'0" and 114 pounds is only slightly smaller than Pedro Martinez in his rookie year. â†µ

â†µYoshida will be expected to pitch in a schoolgirl outfit, and will giggle and wink uncontrollably in between pitches. In between innings she will be chased around by the Kobe 9 Cruise mascot, Kamitsu-ha the Over-Dragon Galactic Destroyer, a scary-looking alien space beast who despite his rough exterior really only wants love and affirmation from another living being. â†µ