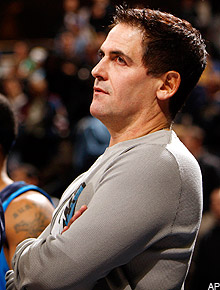 I woke up this morning and found, as usual, an urgent Stephon Marbury story to report. This one had Mark Cuban publicly, and possibly in violation of some rule or other, expressing his interest in Marbury (were he to be released or bought out). Bear in mind, the Mavs already acquired Jason Kidd in an attempt to get themselves a veteran point guard presence. Exactly what Marbury brings to the table that Kidd doesn't is beyond me. In fact, it seems like he'd take away from the chemistry and team-building that's supposed to be Kidd's greatest strength. â†µ
â†µ
â†µThe real gem, though, was Cuban's explanation of why and how he could possibly be serious. From Newsday: â†µ

â†µâ‡¥"We have an organization that we think we've put in place that we think has baby-sitting skills," [Cuban] said. "And that's not a reference to any specific player. But different ages, different maturity levels, different skill sets - you've got to put the organization around them and hopefully, it puts them in a position to succeed. Some guys are higher-profile than others, and unless we think it's going to be a negative, we're willing to take a chance." â†µ

â†µGood to know that Cuban's willing to deal with players in all their imperfections. But right now, the Mavs still need to make Kidd work for them. That's a basketball problem; the last thing they need is an added dimension of trouble, a distraction that takes the focus off new coach Rick Carlisle's attempt to harness his talented roster. Speaking of which, do you think Carlisle wants his first year in Dallas to involve dealing with the likes of Marbury? â†µ
â†µ
â†µAt least I can now safely say that Mark Cuban is the Stephon Marbury of NBA owners.â†µ