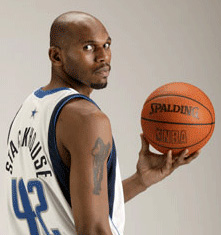 Hallelujah, it's raining Mavs, or at least sketchy stories about the franchise. Recap: First, we had Mark Cuban expressing an interest in Stephon Marbury, while talking up his franchise's built-in babysitting infrastructure. Then, Cuban's getting tagged for inside trading. â†µ
â†µ
â†µNow, amidst all this drama, another weird development in Mavs-land. Jerry Stackhouse is in street clothes, and healthy, and no one quite understanding why. From The Dallas Morning News: â†µ

â†µâ‡¥Despite appearances, the Mavericks insist there is no controversy with the veteran swingman. Sunday's game against New York was simply a bad matchup for Stackhouse to get minutes. So he was put on the inactive list. ... â†µâ‡¥

â†µâ‡¥Said coach Rick Carlisle: "He was just inactive. I talked to him about it. I'm going to talk to him [today] and see about the next game. He's fine. It was matchups and some other stuff. But it's not a big deal. â†µâ‡¥

â†µThe article references the need for youngsters like James Singleton and Brandon Bass to get minutes. But inactive? Is this another case of the D'Antoni doctrine, the one that says it's better to declare big name vets inactive rather than trot them out for six minutes of garbage time? If so, there's a big difference between applying it to a human landmine like Marbury, and Stackhouse, a valuable, tough, clutch scorer who has been a key player on the Mavs these last four seasons. â†µ
â†µ
â†µDallas won, and Singleton and Bass played well. And be very clear on this, Carlisle, not Cuban decided this. Still, it's yet another weird bit of news coming out of Dallas. At what point do we break out the Quarantine gift baskets?â†µ