In Which We Feel the Need to Defend the Internet From the Mainstream Media ... Again

Share All sharing options for: In Which We Feel the Need to Defend the Internet From the Mainstream Media ... Again 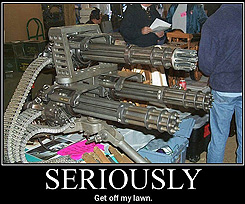 The biggest threat facing President-elect Obama isn’t going to be the economic crisis, or the war(s), or even the NCAA playoff system. No, it will be the internet, which is ruining the technology-free world we once knew. From a review of ESPN’s new webshow “Mayne Street,” the Daily Herald’s Ted Cox takes a moment to let the World Wide Web know it needs to get off his lawn: â†µ

â†µâ‡¥In fact, it's just more proof of how the Internet is ruining the world, including the sports world, which many believed couldn't get any worse. ... â†µâ‡¥

â†µâ‡¥And clicks, my friends, are what it's all about in the current media environment. Page views - from different computers, not the same one over and over - are where it's at. So blogs make reference to one another and exchange links to get the click-go-round going. Altogether, it produces a narcissistic, self-referential attitude. â†µâ‡¥

â†µAlright, so maybe (hopefully) the bit about the internet ruining the world is sarcasm and/or hyperbole, but I’m having a hard time understanding how giving credit out to other blogs in the form of links leads to narcissism. By giving out a link, you’re building up someone else, not yourself. And bloggers don’t link to each other for the sole purpose of a “I scratch your back, you scratch mine” exchange of page views. They do it to acknowledge what others have done ... to give peers the respect and credit their work deserves. Or to simply add further context to a topic. It’s really no different than when an AP news article gaves ESPN credit for breaking a story first, for example. â†µ

â†µOf course the internet is ultimately about the page views Cox speaks of, but this is nothing new for sports journalism. Except instead of page views, in the past it was about selling subscriptions to, or copies of, a magazine, newspaper or book. Viewers, whether it’s print or on the internet, equals advertisers, advertisers equals money. It’s the same as it’s always been. â†µ

â†µHaving said that, Cox is right: “Mayne Street” isn’t all that funny. Although I don’t think it will prevent the sun from rising tomorrow. â†µ