You may not care about my alma mater George Mason University and its basketball program. And that’s fine. They had their one shining moment three seasons ago. But whether you keep up with the Patriots or not, you’re probably familiar with their mascot Gunston. He’s developed a sort of cult following, similar to that of Western Kentucky’s Hilltopper mascot. Both of them are basically they same, which is to say they’re big round blobs of some fur-like material that don’t really resemble anything. â†µ

â†µAs of today, however, the Hilltopper stands alone in the category of blobbish mascots. Mason’s Gunston done got himself a makeover. The before and after: â†µ 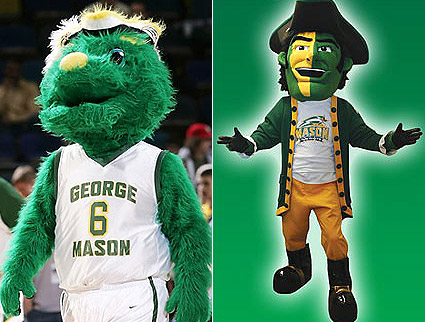 â†µYep, there he is, “The Patriot,” which is his name for now apparently. He’s kind of two parts Sam the Minuteman and one part David Puddy from Seinfeld. Regardless, there’s nothing funny about this new mascot and I want my green furry monstrosity back. â†µ

â†µAlthough, in Mason’s defense, they did their best to accurately represent what a true patriot looked like. From the school’s athletic department: â†µ

â†µâ‡¥The 7-foot 240-pound mascot which resembles a Patriot can be described as an athletic, strong and agile and reflects the spirit of the University. â†µ

â†µ This is accurate because -- little known fact here -- George Mason himself was actually a 7’4”, 250-pound four sport standout who could shoot lightning bolts from his arse. â†µ