LeBron's Future Kingdome Is in Cleveland

Share All sharing options for: LeBron's Future Kingdome Is in Cleveland 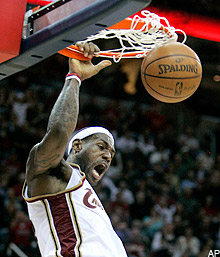 We've all gotten used to reciting "Brooklyn Nets (Shame on You)" whenever the issue of LeBron James comes up. But, as seems to happen every few months or so, almost on cue, the sobering news from the ground: Ain't nothing doing there. From The New York Times: â†µ

â†µâ‡¥The team's planned move to Brooklyn is at a standstill, which could significantly lessen the chances of James becoming a Net ... The Nets' move has been sidetracked by delays, the faltering economy and legal challenges to Atlantic Yards, the proposed development that would include the new arena. The latest litigation has pushed groundbreaking to next spring at the earliest, with a predicted opening in 2011. â†µ

â†µA lot of what I cut there it Sonny Vaccaro insisting that LeBron's headed to the Knicks. Which does make me drool a little, and make a certain kind of superficial sense for everyone involved. But the article also touches on the more-complicated-than-it-sounds proposition of Bosh, Wade or Amare joining James in Cleveland. And I think so far, this season's done a lot to legitimize that scenario. It's become obvious that, with just the slightest boost in personnel, The King get extra-charged, and Mike Brown is vindicated as a coach. â†µ
â†µ
â†µSo yeah, it's Cleveland. But it's LeBron's town. And it works. Not quite the same as South Beach or MSG, but this new crop of stars isn't wholly cynical. Especially not someone like Bosh, who has been toiling in Toronto, or Amare, who witnessed the rise and fall of a great team in Phoenix. If James recruits them to Cleveland, and the money's there, would they really turn down that once-in-a-lifetime chance? â†µ
â†µ
â†µThis is still all wild speculation, but for now, I'd say cynicism's running a distant second to possibility and players wanting to build dynasties. And all it took was a little civic chaos up in Brooklyn, and Mo Williams to spark the Cavs. Butterfly effect, or something.â†µ