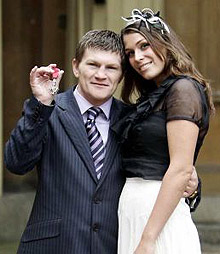 Ricky “Hit Man” Hatton, like many a rapscallion from Manchester, likes a pint of warm lager now and then. Not exactly a crime, is it? Last year, after he got KTFO by Floyd Mayweather, he reportedly went on a mother of a binge, bit of an epic really that ended up making the press and whatnot. But bloody bleedin' hell, you’d set off on a binge too if you’d just been completely gob-stopped by a trash-talking loudmouth in front of a stadium full of your fans singing your bloody bleedin’ name! â†µ

â†µHatton never has shied from the fact that he goes about his boxing business in non-traditional fashion, plowing himself with beer and all manner of fried foods in between fights, often putting on 30 or 40 pounds of flab that he then must shed as quickly as he gained it during torturous training camps that many claim leave him in less-than-stellar condition come fight night. â†µ

â†µRecently, his new trainer, the shrinking violet known as Floyd Joy Mayweather the First (convicted cocaine trafficker, poet and noted sweet scientist, not to mention father of Ricky's nemesis and conqueror) told Ricky that and that it was time for him to stop drinking and carousing altogether because it was starting to have a massive effect on the fighter’s health and performance in the ring. â†µ

â†µRicky came out with his public reply to this request a few days ago, and it was simple and to the point. “I won’t stop drinking,” he said. â†µ

â†µGood for you, Ricky, well done mate. I mean, first of all, you’re fighting Paulie Malignaggi on Saturday and Lord knows that you probably could handle that ponce after six pints of the brown and some chipped beef on toast. Second of all, when exactly did being a severe alcoholic become “bad” for you? History has been written by severe alcoholics, Nero, Beethoven, Dean Martin. I think that noted American cultural critic Homer J. Simpson put it best when he said, “Ah alcohol, the cause of, and solution to, all of life’s problems.” â†µ