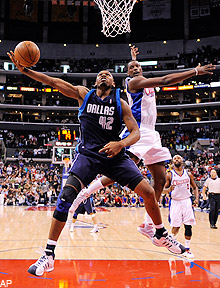 Yesterday, everything was cool with Mavs veteran Jerry Stackhouse stuck in street clothes. What a difference a day makes; while Stack hasn't exactly demanded a trade, he's working hard at whatever the more polite equivalent would be. From the Star-Telegram's Full-Court Press: â†µ

â†µâ‡¥Stackhouse was adamant that he is not demanding a trade and that he remains loyal to the franchise, but he is seeking a resolution he hopes can both benefit him and the team. â†µâ‡¥
â†µâ‡¥
â†µâ‡¥"I'm exploring options," Stackhouse said after the Mavs' Monday workout in Charlotte, N.C. "The team is always going to protect itself, I can't force their hand to do anything. I don't really know all the options right now. I talked to [agent] Jeff [Schwartz] yesterday. We've had dialogue over the last few weeks. I think it's to the point now where it's time to start researching some things and seeing if there's other possibilities that make more sense for me right now. â†µ

â†µA few facts worth noting: It's true, Stackhouse is "perhaps not a good fit in Rick Carlisle's up-tempo, motion offense that is more freelance than structure." Hence the lousy start. Then again, it's not like these Mavs have firmed up a solid strategy for success, so unless Stack has abruptly plunged over the hill, this might be premature, political, or just a player not interested in being fazed out gracefully. He's been valuable in the past, and while technically he's under contract and can't gripe, the franchise seems more than willing to make him into an afterthought. A buyout or trade would actually, if Carlisle's set in his way, be a nice way to show a vet some respect. â†µ
â†µ
â†µAlso, I found it funny that Stackhouse now needs structure to function. A lot has changed since he was the next Next Jordan, and tried to lead the league in scoring each night. He's still at his best as a scorer, but a more judicious one (oddly, something he accomplished under Carlisle in Detroit some eight years ago). Maybe Stack still has something to contribute, but he's now definitely all grown up, or getting old. Hard to tell the difference in this league.â†µ