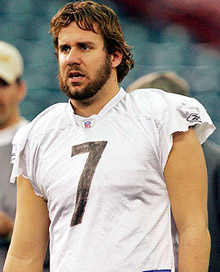 There was much made on Monday about Donovan McNabb not knowing that NFL games end in a tie if no one scores during the 15-minute overtime period. And rightfully so. It is a rule that even the most casual of NFL fans know, so it goes without saying that you’d expect a veteran NFL QB to know it, too. â†µ

â†µBen Roethlisberger would beg to differ, however. When asked yesterday about McNabb not knowing the OT rules, the Steelers’ QB claimed that half -- HALF! -- the league doesn’t know that there are ties in the NFL: â†µ

â†µâ‡¥"People are way too hard on Donovan, making way too big of a deal about this," Roethlisberger said Tuesday. "You'd be surprised. I'd bet at least 50 percent of the league didn't know that at the time. ... â†µâ‡¥

â†µâ‡¥People just assume that the quarterback should know it all and everyone should know that stuff. Whoever thinks about that situation? How often does it come up? The rules change so often that you never know what happens." â†µâ‡¥

â†µYeah, those pesky overtime rules, always changing and stuff. It’s so complicated. I mean, they altered the OT rules as recently as ... 1974. But you couldn’t possibly expect the quarterback to know a rule that’s been in place for 34 years.â†µ