Share All sharing options for: Tough Talk From D'Antoni's Knicks Shows an Evolutionary Step in the Right Direction 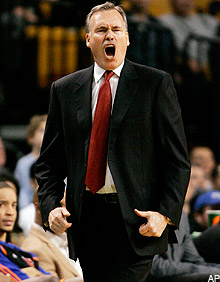 About this emergent Celtics-Knicks rivalry: Here's the really stupid thing Quentin Richardson said last night, after his team fell 110-101 to a KG-less Boston squad (from the Daily News): â†µ

â†µâ‡¥"I'd be just real curious to see what a lot of those guys would say if we weren't in a basketball arena, where there are no referees and NBA officials to stop certain things. I mean it wouldn't be the same story. They are the world champions and rah-rah-rah, the tough talk I don't buy. I come from a neighborhood where you can say what you want to say and until you do something with it it don't mean nothing." â†µ

â†µWell, according to Q's own logic, getting a ring would be "doing something with it." And while he's right, he does come from an especially rough neighborhood -- and have the familial scars to prove it -- so do plenty of other NBA players. I don't think it's worth doing a player-by-player comparison of whose hood is roughest on these two teams, but for starters, Leon Powe didn't have such a rosy upbringing, either. Maybe that's why he was mixing it up a little more than usual under the basket last night. â†µ
â†µ
â†µBut isn't the rap on D'Antoni teams that they're soft, and therefore need to do things like acquire Kurt Thomas, or blow it all up for Shaq? Even if the Knicks are still a small team, you've got to be excited about them bringing some toughness to Seven-Second-Or-Less without selling out the concept. Like this one from Richardson: "They respect us, whether they said it or not." Or Zach Randolph's, "They do a lot of talking. They know they are protected on (the) court. That's why I don't pay that no mind. Because a lot of guys get off the court and they tuck their tails (between their legs)." â†µ
â†µ
â†µYeah, maybe that one's pushing it, but it's at least a little more vague, and more classic diss-like than Q's bone-headedness. More to the point, the Knicks have to be encouraged when Paul Pierce responds with, "The Knicks try to get you to play their game with the talking and the small ball. We can't get caught up in that." Okay, fine. Except that the Celtics talk non-stop, try and intimidate, and carry themselves -- as they should -- like all other teams should bow down. If the Knicks start getting seen as a team that runs, scores, and will get up in your face, that's the best of both worlds. Kind of like how, during last year's Rockets win streak, many saw that team as combining the defensive grit of the Jeff Van Gundy years with Rick Adelman's fancy offense. â†µ
â†µ
â†µA D'Antoni team with attitude that's not afraid to get physical -- even if it's overmatched -- is definitely an evolutionary step in the right direction.â†µ