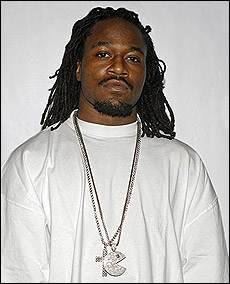 Adam Jones, the artist formerly known as Pacman, finished the inpatient bit of his alcohol rehab. Now Roger Goodell will evaluate his clinical data. How Goodell is qualified to do this in any sense is beyond us unless he's picked up a clinical psychiatry degree somewhere in the past month or so, so he's probably going to nod along with whatever experts tell him and make his decision as to whether Jones has recovered from his "alcohol problem." â†µ

â†µPutting his phone down for just a few seconds, Chris Mortensen had this to say about the evaluations: â†µ

â†µâ‡¥"If they come back and say Pacman Jones doesn't have an alcohol problem, then that creates a whole new range of problems." â†µ

â†µTranslation: "What if the doctors come back and tell us he's just an idiot." This is a real problem: what if you have a player who, when left to his own devices, will set his own pants on fire and plow cars into innocent trees at an alarming rate? What do you do if the official diagnosis on a player is "terminally stupid; no treatment options available." â†µ

â†µThe option for the Cowboys is to control as much of his life as possible while getting someone to make sure he doesn't try to fry frozen turkeys or do other insanely dumb things with himself. However, Mortensen is completely right here. A diagnosis of dumb for Pacman might in fact be far worse than a diagnosis of an acute alcohol problem. There are established protocols and treatment programs for alcohol abuse: 12-step programs, therapy, and my favorite, joining the British Theater and becoming a generation-defining actor. There is no cure for just plain stupid, and under the American Disabilities Act there are no exceptions for firing the terminally stupid because of their condition. â†µ