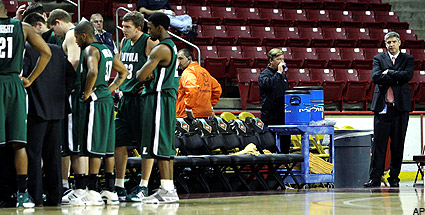 â†µ
â†µThere are several ways to ensure you won’t get yourself kicked out of a basketball game. Rasheed Wallace is not familiar with any of them. Loyola (MD) coach Jimmy Patsos (seen in the nightmares of referees who have worked his games looking like this), on the other hand, found a clever way around getting ejected last night. â†µ

â†µIt all started in the first half when Patsos earned what he called an unwarranted technical foul without any warning whatsoever. The ref told him if he said one more word, he’d be T’ed up again, and kicked out of the arena. So, to avoid the ref hearing him say anything, good or bad, Patsos moved to the very end of the bench, as you can see in the photo above, and let his assistants do most of the coaching. â†µ

â†µThings clamed down for a bit, but in the second half, the ref who was giving Patsos trouble began yelling at the Loyola coach and his assistants. Out of options, and unable to utter a word, Patsos did this: â†µ

â†µâ‡¥"I didn't want to get tossed out. I had my hands up in the surrender position," he said. â†µâ‡¥

â†µâ‡¥Patsos said video of the scene shows Loyola athletic director Joe Boylan in the stands, placing his hands on his head in astonishment. Seconds later, Patsos climbed about two rows into the seats to sit behind Boylan. â†µâ‡¥

â†µâ‡¥"I didn't want to hurt the school or the program, but at that point I really didn't know what to do," Patsos said. â†µâ‡¥

â†µHe later rejoined the team on the bench and made it through the game without getting tossed. Impressive, considering climbing into the stands is a pretty decent way of showing up the ref. Also: NBA players, do not even think about attempting this maneuver.â†µ