Brad Childress Is Not a Woman, Is Constructed of Steel and Dynamite

Share All sharing options for: Brad Childress Is Not a Woman, Is Constructed of Steel and Dynamite 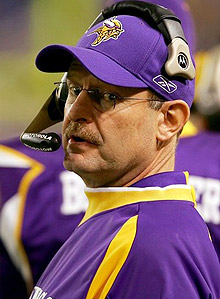 Troy Williamson, who was drafted No. 7 overall by the Vikings in ’05, never did anything of value in Minnesota and is now busy continuing to be a bust in Jacksonville, has challenged his former coach to a fight: â†µ

â†µâ‡¥Williamson said Wednesday he lost respect for his former coach [Brad Childress] last year and would like to "duke it out" with him when the Jaguars host the Vikings on Sunday. â†µâ‡¥

â†µWilliamson says he’ll even fight with both hands tied behind his back, which, if you’ve seen the effectiveness of Troy’s hands, you’d realize is an advantage for him. But Childress isn’t backing down, probably because he has a mustache which is a clear indication that he is not to be trifled with. Plus, there's this: â†µ

â†µâ‡¥When pressed about his height and weight on a conference call, [Childress] responded: "Do you need my reach? I'm not like a woman; I'll give you my weight. It's 190 pounds of twisted steel and rompin', stompin' dynamite.” â†µ

â†µSo clearly, Williamson would be best served not fighting Childress, but rather earning reverence with his play between the lines. Although that might be difficult seeing as he’s already been ruled for Sunday’s game with a groin injury. It may or may not be related to his manhood suddenly waning after challenging a 52-year-old to a fight.â†µ