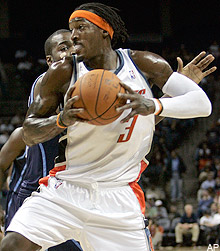 You're just not used to hearing much about the Charlotte Bobcats, despite my best efforts to get Gerald Wallace prematurely elected into the Hall of Fame. So imagine my surprise when today's rumor pages revealed a veritable firestorm of hot, sexy, tremulous, eve-of-destruction Bobcats rumors. â†µ
â†µ
â†µCome on down, â†µNewark Star-Ledger: â†µ

â†µâ‡¥The Nets continue to be in trade discussions with Charlotte, which is desperate for frontcourt help, but they don't have the expendable post player Larry Brown wants. The Bobcats are willing to part with Gerald Wallace for a player of consequence, but are more actively pushing Matt Carroll or Adam Morrison, mindful that the Nets are shooter-crazy these days. â†µ

â†µI'm glad that Ryan Anderson, Yi Jianlian, Sean Williams, and Brook Lopez are all essential to the future. All of them. But wait, don't dwell on that. Here's more, from HOOPSWORLD: â†µ

â†µâ‡¥According to a couple of well-informed sources the Bobcats have been aggressively working the phone lines as they watch their attendance drop in direct proportion to their winning percentage. It sounds like we could see a huge move made by the Bobcats in the next few hours. â†µ

â†µUh-oh. Storm clouds gathering. What's the omen here? Charlotte's waiving of scrubs Linton Johnson and Andre Brown. But wait, what's this? They've also signed Dwayne Jones to fill one of those roster spots. So you've got a strong desire to deal, tinkering that suggests an imminent trade, and a signing that undoes said tinkering. â†µ
â†µ
â†µRumors almost never come true. Here, though, there's so much happening, and so many desperate scenarios circulating, something's bound to go down. Otherwise, a lot of agents, executives, and owners are going to be asking Charlotte for some of their life back. The depressing thing is, the only logical outcome of this mess is Wallace getting shipped out at a cut rate to make Larry Brown feel better about his view of the world. When, from a pure impact player standpoint, Charlotte needs Wallace far more than any suitors. Good to know that LB is back and hasn't missed a beat.â†µ