In Which We Enjoy the Plight of the Thunder

Share All sharing options for: In Which We Enjoy the Plight of the Thunder 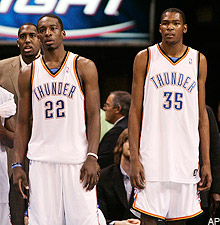 Let me repeat this handy little meme for OKC fans, David Stern, Clay Bennett, and everyone else who swore that moving the Sonics made good sense: There's no Chris Paul. Say it like at the end of The Usual Suspects. The Hornets weren't just some itinerant team who showed up, found a home, and learned to depend on the quasi-home crowds as much as the crowds embraced them. This was a team on its way up in the perilous West, with a perennial MVP candidate who only a blind and dead man wouldn't drop everything to watch. â†µ
â†µ
â†µKevin Durant is a unique player, but he's still finding himself. And with a sucky coach, pock-marked roster, and lack of any direction other than playing hard with discipline, there's zero inspiration come to Oklahoma City with these Thunder. Thus, it pains me to report, as reported in The Oklahoman: â†µ

â†µI kept all the line breaks for poetic justice, and I rest my case. Bennett ruined the team to push away Seattle fans -- a team that wasn't so hot to begin with. So Durant or no Durant, this is a crap product. It's actually an insult to his fellow Okies that Clay assumed this wouldn't be an issue. But that's not my business. I'm still excited from having found out last night -- really belatedly -- that Aubrey McClendon lost close to $2 billion in the recent financial collapse. â†µ
â†µ
â†µSo yeah guys, just keep thinking you pulled a fast one on Seattle. I'm hoping that, between the individual fortunes of the owners dwindling fast, and the team fading into nothingness darn soon, the Sonics will return just in time for Durant to sign with the Knicks.â†µ