T.O.'s Fashionable Tribute to the Eagles

Share All sharing options for: T.O.'s Fashionable Tribute to the Eagles

Two of America’s most hated were in the same place at the same time last night when the NFL Network aired the first part of Deion Sanders’ interview with T.O. during halftime of the Bengals-Steelers game. The content of the interview is to be expected: Owens more or less saying that he needs to be more involved and the offensive scheme should be constructed around him. And you know, both of those statements are probably accurate. It’s the not saying them in public part that T.O. still doesn’t grasp. â†µ

â†µBut the content isn’t the most interesting part. As PFT points out, take a look at the shirt Owens decided to go with: â†µ 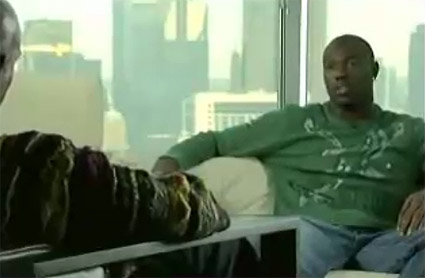 â†µThat looks strangely similar to any number of vintage Eagles t-shirts I’ve seen. Nah, it’s probably just some strange coincidence. Surely, a green shirt with an Eagle on it in no way made T.O. think of the football team he once scorned. He just looks good in that color. â†µ