D'Antoni Would Be So Proud of Texas Tech

Share All sharing options for: D'Antoni Would Be So Proud of Texas Tech 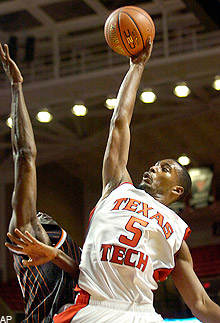 Last night, Texas Tech beat geographically confused East Central Oklahoma 167-115. That’s 282 total points in the normal 40 minutes of regulation. The 167 Texas Tech scored is one point less than the total of their first two games combined. The Red Raiders’ entire starting five scored in double-digits, along with five of their bench players. But here’s the best stat of the night: Between the two teams, a field goal was attempted every 5.175 seconds. Pat Knight is clearly taking Mike D’Antoni’s seven seconds or less philosophy to new heights. â†µ

â†µâ‡¥"I'm a big believer in confidence," Knight said. "We got 10 guys that score double figures. Proves to them they can at least put it in the bucket. Our defense is a little different. The game is just so different from anything. We're not going to face anything like this." â†µ

â†µI’m not sure I’d call giving up 115 to East Central a confidence builder, although certainly Pat’s father is quite proud of his son’s commitment to defense.â†µ