Knicks Free Cap Space, Look to the Future in Dealing Crawford for Harrington

Share All sharing options for: Knicks Free Cap Space, Look to the Future in Dealing Crawford for Harrington 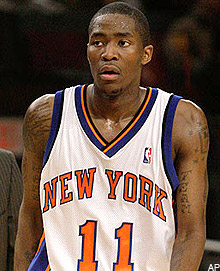 The latest reports on the Al Harrington deal that we discussed here about an hour ago: It's Jamal Crawford for Harrington, not Malik Rose. That's kind of a shocker. Crawford's been especially potent for D'Antoni, arguably playing the best ball of his career and, after a rocky beginning, has really gotten it. But Harrington's deal expires in 2010, while Crawford's on the books til 2011. The Knicks cap situation is a mess because they're so far over; however, this can finally free up the max money they need to do ... well, you know what they'd like to do. Bottom line: This deal is about the future, not this season.
â†µ
â†µAs for the Warriors, who knows what this means for them. I guess between Crawford and Monta (once he's back) you have one total point guard. Or, to look at it another way, a guard rotation of Monta, Crawford, and upstart Anthony Morrow is potent and allows C.J. Watson to return to the bench. This being Don Nelson, though, it's anyone's guess what will happen. One thing's for sure: If these two offensive gurus have any sort of super-secret bet over whose team will lead the league in scoring, Golden State just pulled way, way ahead.â†µ