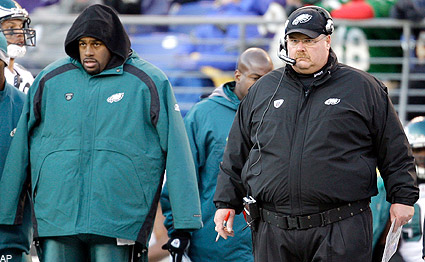 â†µ
â†µIn Andy Reid's press conference this afternoon, the Eagles coach said that Donovan McNabb is still the team's starting quarterback.
â†µ
â†µGiven the short week (the team plays Thursday night against the Cardinals), the unfortunate way Kevin Kolb played in the second half against Baltimore, and the fact that the game is in Philly, this is probably the right decision. If Kolb were to make his first career start in front of the Philly faithful this week, he may never recover from the emotional distress of having his sexuality questioned by the fans in ways he'd previously never imagined possible after throwing his third INT.
â†µ
â†µAll of this, however, still does not explain why Andy Reid requires a nylon, double reinforced, military duty belt to hold up his trousers.â†µ