Agents Rule the World and Will Decide the Whole LeBron Business

Share All sharing options for: Agents Rule the World and Will Decide the Whole LeBron Business 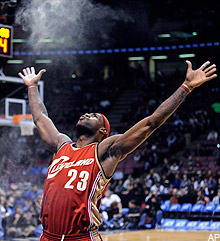 It's gotten to the point where I've started putting "2009" on my checks, assuming that 2010 must be write around the corner. Such is the hypnotic roar of the basketball press, which in the wake of last week's Knicks trades, made "LeBron to the Knicks" all but a no-brainer. So what happened next? The kind of escalation rumors pages can only dream of: The steady drumbeat of "Knicks will land James and another max player." â†µ
â†µ
â†µWe've been hearing that Cleveland could, if they play their cards right, clear enough cap space to re-sign Bron and go after Bosh or Amare. Assuming they let Iverson go, Detroit's got a shot at two max players if Dumars sells draft picks -- the bread and butter of his organization-building at this point. The Knicks are so high over the cap that, to trim down the necessary space, they'd need to do something really stupid like sell a lottery pick. And somehow, I can't see D'Antoni parting with a reasonable shot at Ricky Rubio or Brandon Jennings. â†µ
â†µ
â†µOr, some shadowy figure whose interests exist on a plane of their own could exert his influence and alter the universe forever. From the New York Post: â†µ

â†µâ‡¥South Jersey-based agent Leon Rose can be a big player in all this. He represents both James and Curry. It would be in the best interest of both clients if Rose can orchestrate a trade for the unwanted Curry. That would allow James a chance to join the Knicks along with, say, Stoudemire. ... Carlos Boozer is a free agent this summer and the Knicks would have room if they trade Curry by February for an expiring contract. â†µ

â†µOr maybe Rose too is but a pawn in a bigger game. The more I look at this, the more I see a landscape where -- far from Garnett, Allen, and Pierce agreeing to team up as Celtics -- the Class of 2010, and players like Boozer who could figure prominently in this re-alignment of power, will meet behind close doors and decide all this themselves. LeBron gets his own office to hold private meetings, like Don Vito Corleone. The teams will be notified in due time.â†µ