Share All sharing options for: NFL in 3D: The Future Is NOW! 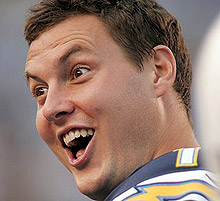 Well, this isn’t quite the level of mind-blowage we were dreaming of a few weeks ago when we first learned that sports in 3D is on the horizon, but it’s a step in the right direction ... I guess: â†µ

â†µâ‡¥Next week, a game between the San Diego Chargers and the Oakland Raiders will be broadcast live in 3-D to theaters in Los Angeles, New York and Boston. It is a preliminary step on what is likely a long road to any regular 3-D broadcasts of football games. â†µâ‡¥

â†µâ‡¥The idea is a "proof of concept," says Howard Katz, NFL senior vice president of broadcasting and media operations. "We want to demonstrate this and let people get excited about it and see what the future holds." â†µâ‡¥

â†µWow, yeah, this should totally get your average NFL fan stoked about 3D football. Or not, seeing as the events will be closed to the general public and will only be attended by the league’s broadcast and consumer-electronics partners. I know I speak for football fans everywhere when I say that I simply cannot wait for some CBS spokesperson to tell us just how awesome it was watching LT slash up the Raiders in the third dimension. Really, nothing gets people excited for something like not allowing them to see what they’re supposed to be excited about. It’s the allure of the unknown, because imagined outcomes are always better than the real results. This is better known as the Brady Quinn Effect.
â†µ
â†µ(H/T: Shutdown Corner)â†µ