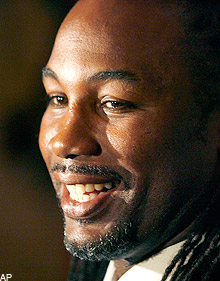 Rumors of a potential return to the ring by former heavyweight champion Lennox Lewis have been circulating heavily since his one-time foe Vitali Klitschko made a successful comeback in mid-October. Immediately after that fight, a victory over Sam Peter, Vitali started calling for Lewis to come out of retirement because they had unfinished business to settle. Klitschko and Lewis met in 2003 in a brawl of a fight that Klitschko was winning on the scorecards before it was prematurely stopped due to a nasty gash above Klitschko’s left eye. â†µ

â†µThe idea of this contest being resumed has tantalized fight fans for years now, and with Vitali, up-and-coming heavyweight David Haye and Lennox’s former trainer, Manny Steward, all urging Lewis to fight again, it began to seem in the past few days that an announcement was near. â†µ

â†µThis weekend, the announcement came, and it came from the mouth of Lennox the Lion himself. Yes, he says, absolutely, he’ll fight again. But the price tag is, well ... a bit steep. â†µ

â†µâ‡¥“If someone wants to pay me serious money, 100 million dollars or so, then I will fight again,” Lewis said. “I don’t have to do this. I don’t need the money and my legacy speaks for itself. But boxing needs me -- the heavyweight game is so boring now ... I would like to save my sport.” â†µ

â†µAll’s I can say to this is ... dah, WHAT? Lennox bloody bleedin’ Lewis, who the hell do you think you are, mate? Michael Jordan? Tom Cruise? Warren Buffett? Spider Man? General Zod from Superman II? OBAMA?!!?!! â†µ

â†µLike so many fighters, I’m afraid, Lennox obviously has a tremendously distorted view of his own importance. Would a rematch between him and Vitali Klitschko do good numbers and briefly reinvigorate heavyweight boxing? No doubt. But would it do De La Hoya/Mayweather numbers? In other words, would it prove to be the most financially lucrative fight of all time? â†µ

â†µNo. No it would not. It wouldn’t even be close. Lennox is a big name, but he’s not Tyson. Let us not forget that in the most successful fights money-wise of his career, Lennox was the B-side, quite a formidable B-side, but still the second part of an equation where Evander Holyfield and Mike Tyson were the first. â†µ

â†µAnd here’s the thing -- in that stratospherically successful De La Hoya/Mayweather fight, Oscar ended up clearing around about $39 mill once the dust settled. He was guaranteed $25 mill up front, and he tacked on another 14 from his take of the PPV buys. â†µ

â†µTo summarize my math here: De La Hoya is 10 times the star that Lennox ever was, and in the biggest money fight of his career (and of all time), Oscar cleared, oh, about $61 million less than Lennox has decided his services are worth as a 43-year-old making a comeback to resume a fight with a 37-year-old that, if we’re being honest about it, wasn’t nearly as good in the first place as people like to pretend that it was. â†µ

â†µHuh. Sounds like a bargain. God, I wonder what that means Tyson will get if he ever comes back. They’ll probably have to give the guy his own country. I hear Iceland is available. â†µ