The Saints Continue to Be Better Without Bush

Share All sharing options for: The Saints Continue to Be Better Without Bush 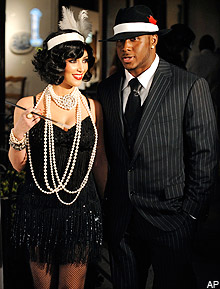 Let’s get this out of the way: Reggie Bush is nothing more than a glorified punt returner. And don’t get me wrong, he’s a fine, fine return man. But that’s about where it ends. He’s not a running back. He’s not a wide receiver. Yet -- when he’s actually healthy -- the Saints insist on trying to make him some combination of both of those positions and it’s to the team’s detriment. â†µ

â†µIt’s easy to understand why they try to gameplan to Bush’s strength, which is getting himself one-on-one (or even one-on-two) with defenders in the open field. After all, they did waste a No. 2 overall pick on the guy. But the Saints are a better team when Reggie isn’t participating. â†µ

â†µNew Orleans’ record with Bush this season: 3-4; without him: 3-1. Yes, that’s an oversimplified way to make my argument, but if you saw the way the Saints played last night, you’d understand why they’re better sans Reggie. When they don’t feel obligated to get Bush his 10-20 touches, it allows Drew Brees the freedom to do what he does, which last night consisted of 20-of-26 for 323 yards with four TDs. â†µ

â†µBush is supposed to be back next week for a huge match-up in Tampa, so he’ll likely have a monster game and make me look foolish. Either way, at this point, the team is still a longshot to make the playoffs even at 6-5. After the game Saints linebacker Jonathan Vilma said, "There's an old saying, '10 and you're in. We've got to find a way to get to 10 wins and get into the playoffs." Unfortunately, that rule won’t apply this season in the NFC. With four teams currently ahead of them in the Wild Card standings, all of whom could very well get to 10 wins too, New Orleans may need to win out. That’s an awfully difficult proposition with Tampa, Chicago, Carolina and Atlanta still remaining on their schedule. â†µ