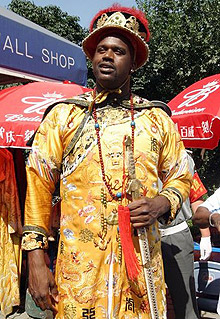 Shaquille O'Neal is twittering, and if you are not familiar with the art of microblogging you may let the fascinating blurbs bubbling up from the mind of the Big Aristotle be your freshman 101 in the subject. Shaq must be Barack Obama -- addicted to his mobile device of choice, because he's actually a fairly frequent poster with a wide-ranging and unpredictable reach for topic and commentary. â†µ

â†µYou know he's a pro because there's no Greg Oden joke after that. He does mention Bill Russell's training partner in the feed, though, and finds him sadly human. â†µ

â†µShaq's Twitter feed also indicates potential dual citizenship, as he may be both Martian and a vampire: â†µ

â†µâ‡¥Watchn true blood, thats were i was born and raised, dat vampire town, shaqula has been discovered aaaaggggh â†µ

â†µShaqula is our next great Halloween costume, but we'll need a pair of stilts to pull it off. Shaq does talk hoops, and more intriguingly, actually answers other twitterers' questions and comments, as he does here to a fan wondering about Shaq's estimation of Kobe Bryant: â†µ

â†µâ‡¥kobe is a beast dude, the best player n da game, i admit, i miss playin wit him â†µ

â†µIt's a lot like being on a mining car on a rickety subterranean railroad zipping through the cavernous expanses of Shaq's mind. It's ridiculously fun, especially when you get inspirational quotes and more tweets about Shaq's determination to send tons of peanut butter to Africa mixed in with late night updates like this: â†µ

â†µâ‡¥Ok i couldnt take it, i had to get a double cheeseburger from whataburger, pls 4give me lol â†µ

â†µWell, we've all been there. Thanks to Shaq's Twitter feed, you can be there when Shaq horrifies his nutritionist at a late-night Whataburger stop. If this isn't magic, we don't know what is.â†µ