The Knicks' Near Future Remains Unclear, But Is in D'Antoni-Walsh's Good Hands

Share All sharing options for: The Knicks' Near Future Remains Unclear, But Is in D'Antoni-Walsh's Good Hands 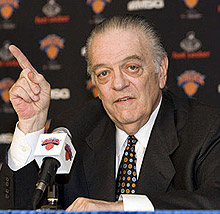 Apparently, Cuttino Mobley has a heart problem. I'd never heard of it, but Donnie Walsh has demanded a full investigation, which, according to Yahoo!, could end up either voiding the deal or allowing the Knicks to prove us all wrong: â†µ

â†µâ‡¥Two team executives and an agent expected the deal to still be completed by Tuesday but believe Knicks president Donnie Walsh is trying to leverage the Clippers into sweetening their offer. The Clippers agreed on Friday to send Mobley and Tim Thomas to the Knicks for Randolph and guard Mardy Collins. The Knicks initially asked for center Marcus Camby instead of Mobley, but the Clippers balked. â†µâ‡¥
â†µâ‡¥
â†µâ‡¥"Donnie's a pro," said one Western Conference executive. "He knows what he's doing." â†µ

â†µIndeed. While Jamal Crawford's exit was the more questionable of two big Knicks deals last week, Randolph was still given up for, essentially, future cap space. Not the kind of thing a city hungry for basketball change, and handed a regime supposedly devoted to this cause, wants to see. Because now, with no Crawford and no Randolph, this team is pure slop. With nothing to do but wait around for LeBron. â†µ
â†µ
â†µOr is it? The Clippers obviously want Z-Bo -- Kaman's supposedly been on and off the block for weeks, which means they desire a better complement to Marcus Camby. They need this, if nothing else as a jolt to bring life to a disappointing start. Are they willing to give up a first-rounder for it? Given how splendidly this is all coming together now, I'd have to say Donnie Walsh thinks so. And that, as a result, I also must believe it to be the case. â†µ
â†µ
â†µSo say the Knicks are looking at three lottery picks between now and 2010. And the possibility of signing LeBron, Bosh, or Amare. And the weirdness around Eddy Curry, who by having the same rep as LeBron could be the key to landing another marquee name. Or at least reuniting Barbosa and Diaw with D'Antoni, since obviously Steve Kerr has decided to stake the Suns' future on irritating big men. This is so far from being over, or predictable, or in any state that could allow us to say "you Knicks really blew this one." â†µ
â†µ
â†µIf there's one thing you should know about D'Antoni and Walsh, it's that they're smarter than you. And the rest of the league. For them, rebuilding the Knicks is going to be much more than just a by-the-numbers reclamation project or a gimmicky free agent grab. This is front office swagger to the fullest degree.â†µ