Whizzinator Riches to Rags Story: From Undisputed Leader in Synthetic Urine to Jail

Share All sharing options for: Whizzinator Riches to Rags Story: From Undisputed Leader in Synthetic Urine to Jail 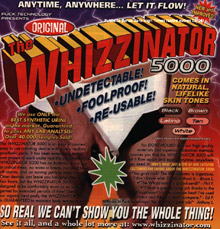 George Wills and Robert Catalano, the owners of Puck Technology, can thank both their temporary fame and ultimate demise on former Vikings running back Onterrio Smith. It was Smith who made Wills/Catalano’s Whizzinator product a mainstay of the internet and sports talk radio after he was busted with one in an airport three years ago. Had Smith not been so desperate to pass a drug test, we may never have know of this glorious product. â†µ

â†µAs if you needed a refresher on this, the Whizzinator was a product to assist in the passing of drug tests. It included a fake penis (available in white, tan, Latino, brown and black) along with dried, clean urine and heating packs to keep said urine warm. You can probably figure out how it works from here on your own. â†µ

â†µLast month, federal prosecutors in Pittsburgh charged Wills and Catalano with conspiracy. Yesterday, the two pled guilty, thus putting an official end to the Whizzinator product. But before the entire story ends with the sentencing of those two in February (they face up to eight years in jail and/or a half-million-dollar fine), I’d like to share my favorite Whizzinator story, from the always reliable Wikipedia: â†µ

â†µâ‡¥In 2006, a Pittsburgh-area woman and her friend were charged with disorderly conduct and criminal mischief after they asked a convenience store clerk to microwave one of the devices so the woman could pass a drug test. The clerk, thinking it was a real penis, called police. The couple were required to reimburse the chain for the cost of a new microwave; OSHA regulations do not allow microwaves to be used once bodily fluids have been in them. â†µ

â†µSee how much this fine product taught us? Now if you’ll excuse me, I have a microwave to throw out.â†µ