Defense Is Out of Style in the NFL

Share All sharing options for: Defense Is Out of Style in the NFL 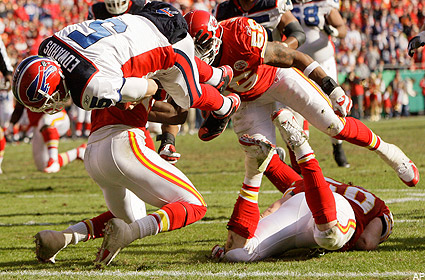 â†µ
â†µYou may have noticed some seriously high point totals around the NFL this past week -- 57 in Dallas, 58 in Detroit, 66 in Arizona, 73 in Atlanta, 76 in Miami, 80 in New Orleans, 85 in Kansas City. All of this mixed in with the not-so-high scores (I’m looking at you, Houston and Cleveland) added up to the first 800 point weekend in the league’s history. From the NFL, via Fantasy Blitz: â†µ

â†µâ‡¥ Monday night's 51-29 win by New Orleans over Green Bay boosted the NFL to the first 800-point weekend in its history. A total of 837 points were scored in the league's 16 Week 12 games, the most ever in a single NFL weekend. The 16 games played in Week 12 averaged 52.3 points per game. â†µâ‡¥

â†µThe NFL is also on pace for the highest point average per game ever. Currently, the average is 45.0 points per, which would top the all-time high (1983’s 43.7 points per game). I blame this all on that Wild-Dolphin-Raider-Raven-Jet-Chief-Cardinal-Brown-Buffalo-Eagle formation I’m hearing the kids talk about so much this season.â†µ