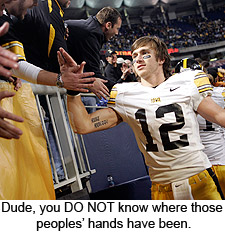 If you’re looking for something to really be thankful for this season, try this on for size: Give thanks that your significant other wasn’t caught having intercourse with a stranger in a bathroom. During a football game. While over a dozen people watched it all: â†µ

â†µâ‡¥Two Iowa football fans were caught having sex in a bathroom stall at the Metrodome during Saturday’s Minnesota-Iowa game. â†µâ‡¥

â†µâ‡¥A group of 15 onlookers were gawking at the scene by the time officers broke the couple up and wrote them misdemeanor citations. â†µâ‡¥

â†µThere is such a fine line between a romantic encounter in the handicapped stall during a sporting event and just plain immoral behavior. This incident was really straddling that line right up until they let the 15th person watch, at which point it became just outright classless. â†µ

â†µAs Matt Ufford at With Leather points out, this is about the only occasion in which the two culprits probably wanted to stay locked up. Man, that ride home with their respective husband and girlfriend must’ve been AWWWKWAARD. â†µ