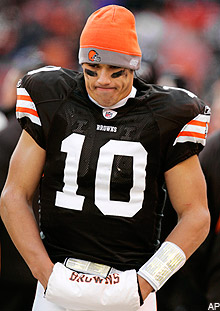 Things are going well for Notre Dame fans this week. On Saturday, they lost to Syracuse (which one Irish co-worker tells me is worse than their Navy loss last season), and now Brady Quinn, their Golden Boy, is out for the season. He decided to play on Sunday despite breaking his finger on a Bills’ player’s helmet two weeks ago, which apparently didn't help things:: â†µ

â†µâ‡¥Multiple doctors had presented Quinn with three options upon examining the X-rays. He could play through pain, immobilize it in a split for four to six weeks, or have surgery. â†µâ‡¥

â†µâ‡¥The injury worsened, said the source, by practicing for the next game and playing in the Browns' 16-6 loss to Houston on Sunday. â†µâ‡¥

â†µâ‡¥"Brady wanted to play," said the source. "If it was going to be fixed a week ago, it would have been virtually the same thing. Nobody had any idea what would happen if he'd just gone out and played with it. Doctors viewed it before then and thought he was OK to play." â†µâ‡¥

â†µThe injury really means nothing to the Browns this season; they aren’t going anywhere with or without Quinn. The problem, however, is that this sets back his starting QB learning curve by five games. And if you look at how he was progressing in his three starts, you’d know that it doesn’t take a football genius such as myself to say that playing out the rest of the season was rather important for Quinn. If you were to graph out his numbers from start one-through-three, the line would trend downward at nearly a perfect a 45-degree angle. â†µ

â†µOn the bright side, this’ll give Quinn more time to tend to his various hobbies, such as frolicking about with fellow Mermen. â†µ