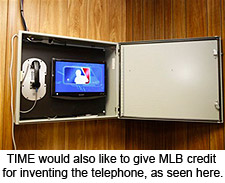 TIME has released its 50 Best Inventions of 2008 list and the creation that comes in at No. 38 -- right after smog-eating cement and before enhanced fingerprints -- is of interest for our sporting purposes: â†µ

â†µâ‡¥Introduced for this season's stretch run, replay allows teams to contest controversial home-run calls for the first time. Using ballpark monitors, umps can review a play from every possible angle. This may add minutes to a game that already suffers from slowness, but that's a small price to pay for making the correct call. â†µâ‡¥

â†µPerhaps I missed something, but I’m fairly certain baseball did not invent instant replay, nor did they invent the idea of using it to get calls correct during a game. In fact, they were so far behind the curve, it took a tidal wave of backlash before MLB finally decided to use replay for home run calls this season. And TIME is giving them credit? English physicist John Bond and his enhanced fingerprints have got to be pissed about this. â†µ

â†µFor what it’s worth, my favorite invention on the list: No. 8, Bullets that shoot bullets. Bad. Ass. It’s technically more like missiles that shoot RPGs, which I think makes it even more awesome, actually. â†µ