Share All sharing options for: Isiah Can No Longer Use Magic as a Reference on His Next Job Application 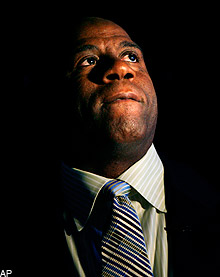 The famously good-natured, generous, upbeat, and community-minded Lakers great has publicly decided to pull the plug on his relationship with Isiah. He who needs no introduction or string of descriptive modifiers. From Bloomberg.com: â†µ

â†µâ‡¥Johnson five years ago told New York Knicks executives that they should hire Thomas, his good friend. Thomas, a Hall of Fame point guard, was fired as coach and president of the Knicks last year as the team suffered through its seventh straight losing season and was at the center of a sexual-harassment lawsuit won by a former team official. â†µâ‡¥
â†µâ‡¥
â†µâ‡¥"I couldn't recommend him again because he's failed a couple times now," Johnson, who won five championships with the Los Angeles Lakers, said in an interview with Bloomberg Radio's "On the Ball" program airing Nov. 29. "So I would probably have to just pass on that one." â†µ

â†µWhile Magic hasn't had any particular basketball successes since retiring, he remains a much-beloved figure and, one late night talk show flop aside, has displayed ambition in putting some oomph behind the term "ex-athlete." His business interests, while they don't always flourish, show his heart is in the right place, and he sees no reason why he can't both make a dollar and a difference. Long ago, Isiah seemed like a parallel figure, a promising basketball mind who could take that 1980's crew and make a force in the front office. â†µ
â†µ
â†µNow, though, Magic's reduced to hoping Barkley can turn to politics without making too much of an ass of himself. Or expecting the Zen-like, walks-on-clouds Michael Jordan to roll up his sleeves, put in work, and prove that he too is a honest-to-god member of that fraternity of ex-ballers trying to prove themselves after the cheers have died down. Not just someone coasting on rep alone. â†µ
â†µ
â†µSuddenly, it makes sense why players like LeBron and Carmelo already seem focused on establishing themselves outside of basketball. This is not a crossroads they want to get stranded at.â†µ